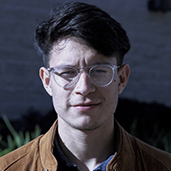 At the age of 16, Mario Guzman had to rebuild himself. He had just moved to the United States and in this new and unfamiliar country he had to attend high school, learn English, find friends, and imagine a future for himself. It was a challenge for him to start over. He had to regain confidence in himself and figure out what he was going to do with his life.

At Skyline College, Mario found himself and his future. The resources he was able to access through the college, the Promise Scholars Program, and other scholarships he’s received have helped steer Mario towards his future in web interactive design.

Mario was born in El Salvador and raised by his mother, a teacher. He had a happy early childhood until the gangs came to his city. He and his mother moved to another city, until the gangs arrived there too and it was no longer safe. “We did this another three or four times — we would move somewhere smaller and safer and then the gangs would show up in our town or city, so we moved again. It was really important for my mom that we avoid conflict areas. She wanted to make sure I got a good education and didn’t join a gang with a dead-end future where I could get killed.”

By the time he reached high school, Mario and his mother were living in relative safety with his aunt and cousins. “I loved high school in El Salvador. I enjoyed learning, did well academically, and I was president of my class. I also traveled around the country playing volleyball. I felt really great.” High school was also where Mario fell in love for the first time — with art and visual communication. “I took a graphic design class and it was an amazing experience to know at age 15 what I wanted to do with the rest of my life.”

Mario’s idyllic time in high school ended abruptly at age 16, with the murder of his cousin Francisco. “I was close with Francisco. When he wouldn’t join a gang, they shot him and other people at the car wash where he worked. I was really scared because I was the next target.” When the gangs told him his was next if he didn’t join and then threatened his family, the Guzman family decided it would be best for Mario to come to the United States and live with his aunt.

“I graduated Oceana High School in Pacifica, but I was overwhelmed with the college system here and my grades were not as good as I would have liked. Once I turned 18 I didn’t want to be a burden on my aunt financially and I didn’t know how I was going to pay for college. There weren’t any options for my future.” Mario had heard about Skyline College through his high school counselor and representatives from the college, who also shared information about the Promise Scholars Program. Within a couple of months of starting at Skyline College as a Studio Art major, he had taken further steps towards his career goals by applying for a position as a student graphic designer in Skyline College’s Marketing, Communications, and Public Relations office.

“The Promise Scholars Program was one of the best things for me. I don’t have to worry about the financial part of college and I can meet with the counselors who have been very helpful. I feel like I’m not alone — I have some support and help to navigate.” Mario’s Promise counselors and his peers in the marketing office encouraged him to apply for other scholarships. He has been awarded the David E. Fisher, Skyline Student Success, and SMCCC Foundation scholarships.

During the pandemic, Mario also received Foundation Emergency Funds. “Everyone was getting laid off or having their hours cut and we were struggling to pay the bills.” The funds helped relieve the burden for the entire family during the worst of the crisis.

Mario now has options and is clearer about steps he needs to take to move forward in his education and professional career. He plans to transfer to a UC (he has already been accepted to UC Santa Cruz) to study web and interactive design. His dream is to work in high tech, in a startup, or in a community college marketing office. Eventually he would like to own his own design studio and teach college classes. “My family graduated college and now I can. I will be proud when I finally have my degree. I was going to quit school because I didn’t have path. Now I have tools, opportunity, and a path. I just needed a little push to be on track.”

“I am grateful for the scholarships I have received and for the Foundation’s donors who have helped me achieve my dreams. Their help really allows students to dream big and get comfortable with what they are going to do with their lives. I was lost and I found my place and I got to the point that I’m comfortable with myself and the things I’m doing and the path I’m taking.”